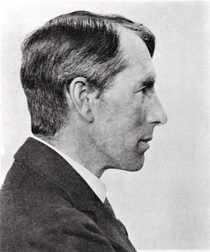 Walter Hindes Godfrey was born on 2 August 1881, the eldest of the six children of Walter Scott Godfrey (1855-1936) and Gertrude Annie Godfrey née Rendall (1855-1922). His birth was registered in the 3rd quarter of 1881 in the Hackney registration district.  His father was a Director of a Wine & Spirit Company and the family were living at 102 Greenwood Road, Dalston.

Our Picture Source, his Wikipedia page and the Sussex Record Society webpage give much information about this man. He was both an architect, specialising in restoring and adapting historic buildings, and an historian, who founded the National Buildings Record in 1941, now absorbed by Heritage England.

He married Gertrude Mary Warren (1884-1955), the marriage being registered in the 2nd quarter of 1907 in the Lewisham registration district. Their eldest daughter, Margaret Lucy Godfrey was born on 14 March 1908 in Radlett, Hertfordshire and Gertrude Mary Helen Godfrey (1909-1994) was born on 22 May 1909, also in Radlett. Kelly's Directory of Hertfordshire listed him in 1908 at 3 Watling Street, Radlett.

The 1911 census shows he was living with his wife and two daughters at 'Kingsdown' 3 Watling Street, Radlett, Hertfordshire. His occupation was recorded as an Architect. Their son, Walter Emil Godfrey (1912-1982), was born on 13 September 1912. On 26 January 1921 their third daughter, Marion Hastings Godfrey (1921-2000), was born and her birth was registered in the 1st quarter of 1921 in the Uckfield registration district.

The 1939 England and Wales Register shows him and his family living at 32 High Street, Lewes, Sussex. His occupation was recorded as an Architect, F.R.I.B.A. whilst his son was shown as a student at the Royal Institute of British Architecture. (His son would later become a founder of the Carden & Godfrey practice).

In the 1950 Birthday Honours List, as the Director of the National Buildings Record, he was made a Commander of The Most Excellent Order of the British Empire (CBE).

Probate records confirm that his address remained as 81 The Causeway, Steventon and that he died, aged 80 years, on 16 September 1961 in the Acland Nursing Home, Oxford. Probate was granted on 19 December 1961, jointly to his daughter, Marion Hastings Godfrey, and his solicitor, Dudley Charles Clarke. His estate totalled £19,219-10s-6d.

This section lists the memorials where the subject on this page is commemorated:
Walter H. Godfrey

Architect. Born Basil Urwin Spence in Bombay. He studied at the Edinburgh Col...