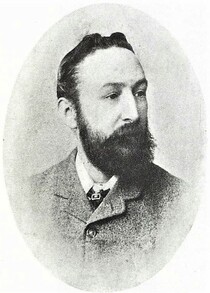 Architect of the Oratory Church and was aged 29 years when he won the competition in March 1876. Not to be confused with Herbert Gribble (1860-1943) an English cricketer who played for Gloucestershire.

Despite the 1847 birth year shown on the blue plaque at 10 Alexander Square, London, SW3, he was born as Herbert Keate Gribble, the fifth of the twelve children of John Gribble (1813-1884) and Jane Gribble née Scott (1814-1876), his birth being recorded in the 2nd quarter of 1846 in the Plymouth, Devon, registration district.

The 1851 census shows him living at 24 Old Town Street, Plymouth, with his parents, two siblings: Margaret Hannah Gribble (1848-1878) and John William Scott Gribble (1850-1873), together with four female house servants. His father's occupation was recorded as an inn keeper.

In the 1861 census he is still recorded as a scholar, living in Old Town Street, Plymouth, with his parents and three siblings: Margaret Hannah Gribble, Eleanor Terrell Gribble (1852-1940) and Thomas Scott Gribble (1853-1887), together with a housemaid and a male lodger.

He converted to the Roman Catholic faith and adopted the middle forename of Augustine, allegedly dropping the forename of Keate. His marriage to Julia Mary Finnigan (c.1840-1904) was recorded in the 3rd quarter of 1869 in the Kensington registration district, where his name was listed as Herbert Augustine Gribble.

The 1871 census shows him as an architect living at 10 Sydney Street, Chelsea, with his wife, their daughter Agnes Cecilia Finnigan Gribble (1870-1951), together with a female general servant and two male lodgers.

In the 1881 census he is shown as Herbert A. Gribble, an architect now residing at 10 Alexander Square, Chelsea, with his wife, their two children, Agnes Cecilia Finnigan Gribble and Bernard Emmanuel Finnigan Gribble (1872-1962), together with a female general servant. Electoral registers in 1883 show him listed at this address.

Probate records state that when he died, aged 47 years, on 8 December 1894 his residence was 64 Redcliffe Road, West Brompton, Middlesex. Probate was granted on 8 March 1895 jointly to his widow, his son who was described as an artist and to Francis Emanuel Caruana (1864-1943) a bank clerk who was the husband of his daughter Agnes Cecilia Finnigan Caruana née Gribble. His effects totalled £1,744-1s-0d and his body was buried at St Thomas of Canterbury Church, Rylston Road, London, SW6.

This section lists the memorials where the subject on this page is commemorated:
Herbert Gribble

From the picture source website: " founded in 1957 by Duncan Sandys, a Britis...

St John’s Wood was once part of the Great Forest of Middlesex. Until the end ...