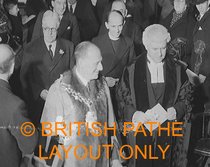 Alderman in the Borough of Hammersmith in 1948.

Our colleague Andrew Behan has researched this man: William Henry Church was born in 1876 in Knightsbridge, a son of Joseph Church and Mary Ann Church, née Johnson. His father was both a Coffee House Keeper and a Domestic Servant. The 1881 census shows the family living at 13 Cumberland Place, Chelsea, (renamed in 1929 to Bray Place), but by the time of the 1891 census the family were living at 8a Upcerne Road, Chelsea and he was a 14 years old Shoemaker. The 1901 census has the family at 45 Westbourne Street, Pimlico, (another street that was renamed and is now Bourne Street) and his occupation is recorded as a Conductor on the C.L. Railway, now known as the Central Line. In 1905 he married Edith Mary Morris and on 28 January 1908 their daughter, Susan Edith Mary Church, was born. The 1911 census shows the family living at 17 Nascot Street, Shepherd's Bush and he is listed as a General Labourer in a Motor Works.

In 1931 his wife died, aged 48 years, but he was to remarry in 1935 to Rose Alice Cliff and the family lived at 2 Bellevue Mansions, Uxbridge Road, Shepherd's Bush. He was elected as a Labour councillor in the Metropolitan Borough of Hammersmith and was a Member of the London County Council for Hammersmith North from 1937 to 1946. He served as the Mayor of Hammersmith from 1937 to 1939 and was also a local Justice of the Peace. Electoral registers from 1938 show him living at 42 Loftus Road, Shepherd's Bush and he was to remain there for the rest of his life. In 1948 he was an Alderman on the Borough of Hammersmith council, serving on their Housing and Town Planning Committee. He died on 22 August 1961, aged 84 years, at the Hammersmith Hospital, Du Cane Road, W12 and administration of his estate, totalling £216-9s-5d, was granted to his widow.

This section lists the memorials created by the subject on this page:
W. H. Church

Chief Justice of England during the reign of Henry IV.  Born Yorkshire.

Justice of the Peace and Chairman of the Penge Urban District Council 1921 - ...