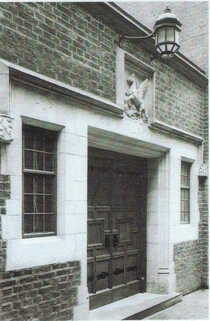 Born India. Called to the bar by the Inner Temple in 1882. Travelled extensively, settled in Singapore where he made his fortune in property. Returned to England in 1905. In 1915 he gave his Singapore properties to the Inn, funding the construction of Niblett Hall, in return for an annuity.

More interestingly, he was a bigamist. His first wife died in 1894 and in 1912 he married wife number 2. Their honeymoon took place in Singapore where Niblett resumed relations with a former mistress. His wife left him, returned to England and was later confined in a mental asylum. In 1917 Niblett married wife number 3. The father of wife number 2 took exception and ensured he was taken to trial, where he received a sentence of just one month, due to ill-health.

He was baptised on 17 March 1851 in Agra, Bengal, India (now also in Uttar Pradesh, India). Educated from 1864 at La Martinere College, Lucknow, Bengal, India (now Uttar Pradesh, India), he left for England in 1879. He joined the Inner Temple on 8 April 1879 and as a law student he was initiated as a freemason in the Urban Lodge No.1196 on 13 December 1881 at Freemasons' Hall, Great Queen Street, Holborn, giving his home address as 1 Upper Bedford Place, London. He was Called to the Bar on 3 May 1882. He did extraordinarily well, travelling a lot in Europe and elsewhere and even did a stint of legal practice in Nigeria. When back in England in the late 1880s an agent for the Sultan of Johor, (also spelt Johore), recommended him as a barrister for the Rajah. This brought him to Singapore where he settled down to an excellent law practice. He purchased and leased large amounts of real estate and profited from their development as they became immensely valuable. He now began to forget his family but kept in touch occasionally with his two sisters, Henrietta and Ellen, neither of whom married, and also occasionally sending them large remittances. He returned to England having become a very wealthy man and freemasonry records from 1887 show his home address as 42 Upper Bedford Place, London. He resigned from the Urban Lodge No.1196 in March 1892.

Apparently, he married a Berta Marie Österberg in Stockholm, Sweden, and in the 1891 census he is shown as a barrister residing at 49 Portsdown Road (renamed in 1939 to Randolph Avenue), Paddington, with his wife, his sister-in-law Jennie Österberg, together with a cook and a housemaid. His wife is recorded as Bertha M. Niblett and that she and her sister were born in Stockholm, Sweden. His wife's age was recorded as 34 years, which would suggest she was born about 1857. However, when she died on 10 February 1894, her age was given as 40 years and therefore she would have been born about 1854. There were no children of the marriage and none of her relatives were present. The cause of death was given as ‘Syncope due to Pulmonary Haemorrhage’ and she was buried in the General Episcopal Cemetery, Calcutta, India. Another sister-in-law was Martina Bergman Ősterberg (1849-1915).

In 1912, William, at age 61 years, married Jessie Winifred Tacon (1873-1960) at St Augustine's Church, Honor Oak Park, Lewisham and took her on a honeymoon trip around the world, including two months in Singapore. Here he resumed relations with a former mistress. His wife left him and immediately returned to England where she was confined to a mental asylum. William also returned to England where his health deteriorated considerably, and he looked around to see how he could spend his wealth. William's nephew, Lance, used to relate a story that in 1915 he (William) planned to return to India to decide on how to share his wealth with the family, but his boat was torpedoed in the Mediterranean and after his rescue, he returned to England and abandoned the idea. In December 1915, he conveyed all his property by deed to the Treasurer and Masters of the Inner Temple in return for an annuity plus income tax. He also made large donations to The Charing Cross and London hospitals.

In 1917 William met and married Alice Susanne Deveson (1855-1935), a widow aged 59 years, a 'lady of superior position, kindness and consideration' in Kingston-upon-Thames, Surrey. Apparently, he hoped that, with his lawful wife being in an asylum, no one would bring his bigamy to notice, but Jessie’s father had been keeping an eye on him and notified the Master-in-Lunacy who brought charges of bigamy against William. Eventually, because of his aged condition, poor health, and his wife’s mental condition, he was sentenced to prison for only a month. Divorce proceedings were commenced and a decree nisi followed, but he died, aged 69 years. Probate records state that he died on 30 April 1920 at home, 61a Randolph Crescent, Maida Vale, and that when probate was granted on 7 June 1920 to Water George Wrangham, a barrister, his effects totalled £1,193-1s-9d. He was buried in Kensal Green cemetery in London. We note that, 2022, the numbers in Randolph Crescent don’t reach beyond 37. But at the corner with Randolph Avenue there is a number 61, of Randolph Avenue, which is large enough that even a rich man might have lived in only the ‘a’ part of it.

William Charles Niblett acquired great wealth but his end was lonely and tragic. He had given away most of his wealth, but what remained passed on as donations to various claimants and to his sisters, Henrietta and Ellen. The Inner Temple built two modern lecture halls in 1932 (the Niblett Lecture Halls) on the proceeds from his estate. They escaped the German Blitz in World War II but later, destroyed by fire, were finally demolished in 1992 to make way for the new Littleton Building. The wall of the Littleton building now contains a relief of Pegasus from the original Niblett Hall. Scholarships were also created for some relatives.

We have not found an image of this interesting man and so instead we are showing a photo of the Pegasus relief as it was displayed on the original building.

In May 2022 we were contacted by Victor Temple Q.C. who is researching this man with a view to writing an article for publication in the Inner Temple Year Book. Amongst much interesting information he has found a cutting in The Straits Times newspaper which states that William Charles Niblett 'was a retired barrister of Princess Square, Bayswater ('Prince's Square' was probably intended) and that in attempting to enter a moving 'bus in Holborn he slipped and was crushed between the wheel and the kerb. He died at a nursing home on 2 May 1920'. This information obviously conflicts with the official England & Wales, National Probate Calendar (Index of Wills and Administrations) records. Victor also supplied the information about William Charles Niblett's first wife, his bankruptcy receiving order and the 1891 census, for which we are extremely grateful.

Victor also states that he is deeply sceptical about the claim that William Charles Niblett took up with a former mistress. He says that it makes little sense and was made by a mentally disturbed wife and has provided a possible alternative explanation as follows:- Following his return to England William Charles Niblett (WCN), now in his early 60s and in far from robust health, married Jessie Winfred Tacon. The wedding took place at Honor Oak, in Oct 1912. The available material suggests this was primarily a marriage of convenience from the view of both parties.

WCN was already known to the Tacon family, there being evidence that he and Jessie’s father, a hosier and outfitter, were already acquainted. The nature and extent of the acquaintanceship remains obscure. The Tacon family lived in Forest Hill, South East London. The 1911 census records Jessie, aged 38, living at home and working as a book keeper. Before her marriage Jessie’s mental health had been precarious, necessitating admission to Camberwell House Asylum. It seems that WCN was unaware of this matter, but following the marriage the spectre of her mental condition was to resurface with a vengeance. WCN and his new bride travelled extensively, ultimately reaching Singapore in late May 1913. Despite this extended honeymoon It was apparent from her letters home that she was singularly unhappy and matters were not on an even keel.

An article written on 13 July 1913 in the Straits Times provides an interesting —and potentially significant— backdrop which has the capacity to shed light on later events. It recorded that a brown leather bag containing a quantity of jewellery and other items valued at £160 belonging to Mr and Mrs Niblett, staying at Raffles hotel, had been stolen from Borneo wharf. Also stolen were passenger tickets for two persons travelling from Singapore to London. A reward of 100 Straits Settlements dollars was offered for the bag’s return. There is no direct evidence as what effect this incident had (if any) on Jessie Niblett, or indeed as to her immediate reaction. Nor does history record whether any claimant stepped forward. Rather more importantly, Jessie Niblett returned to England alone, closely followed by WCN.

On her arrival Jessie spoke to her father, alleging that when in Singapore WCN had resumed relations with a former mistress, causing her much distress. It was further implied by the family that the association had also caused a relapse in Jessie’s mental health, leading to her readmission to the asylum at Camberwell House. Given the overall frailty of Jessie’s mental heath it is quite impossible to assess fairly the veracity of this allegation, but there remains a perfectly realistic alternative explanation, namely that the trauma of the theft of her personal items triggered the relapse.

This reasoning is given additional weight when one considers an unsigned note found in the Inn’s archives. Written on 9 July 1914, it read:- ‘Treasurer’s Office. I had an interview with Mr W.C. Niblett today, he informed me that he was not anxious to benefit his wife’s relations for the following reasons. Before his marriage he was assured by his wife‘s father that the lady was in every way healthy and fitted to be his wife. 6 months after marriage she became insane, and Mr Niblett then discovered that she had been shut up in the same asylum in which she now is, for insanity before the marriage. The father, on being confronted with this, stated that he thought she was cured and there was no reason to tell Mr Niblett.’

Victor Temple is keen to get in touch with any surviving relatives of the siblings of William Charles Niblett and we here at London Remembers will be more than happy to pass on any information or contact details to Victor Temple.

This section lists the memorials where the subject on this page is commemorated:
William Charles Niblett

citizens and senat of Berlin

Berlin has a mayor and an executive making up the Senat, similar to the Great...