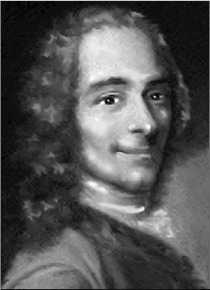 Born in Pairs as Francois Marie Arouet. Adopted the name Voltaire aged 24. The traditional story is that the intolerance of Catholic France forced this free-thinker to escape to the land of liberty. Alternatively: he had insulted the regent and, after imprisonment in the Bastille, he escaped the socially embarrassing situation by moving to London for two years. At the time the French and English generally disliked each other but Voltaire was an anglophile, seeing it as the land of progress. He also found London a convenient place to be since there were many Huguenot French publishers and printers (real exiles) who were keen to publish material attacking Catholic France.
He arrived in 1726, not speaking English. Initially lived in Wandsworth and learnt English, at least in part, by attending performances of Shakespeare's plays at the Drury Lane Theatre. To the English he claimed not to appreciate Shakespeare but later, when back in France, he promoted the English playwright, producing some of the earliest translations. With fluent English he went on to mix with English high society and the great figures of the Enlightenment. In 1728 he returned to France, where he became a key figure in the French Enlightenment. In 1733 he published "Letters on the English Nation" which clearly showed his Anglophilia.
Died in Paris.

2022: The Guardian reported on the removal of a statue of Voltaire, in Paris: "Rumours spread that Voltaire... was a victim of “cancel culture”, removed by politically correct City Hall officials because, while he wrote denouncing slavery, he owed part of his fortune to colonial-era trade and has been accused of racism and antisemitism."

This section lists the memorials where the subject on this page is commemorated:
Voltaire