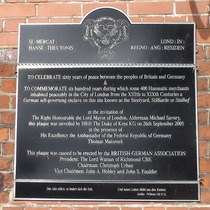 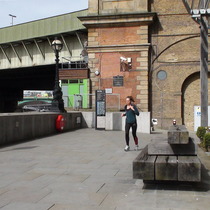 To celebrate sixty years of peace between the peoples of Britain and Germany & to commemorate six hundred years during which some 400 Hanseatic merchants inhabited peaceably in the City of London from the XIIIth to XIXth centuries a German self-governing enclave on this site known as the Steelyard, Stilliarde or Stalhof.

At the invitation of the Right Honourable the Lord Mayor of London, Alderman Michael Savory, this plaque was unveiled by HRH the Duke of Kent KG on 26th September 2005 in the presence of His Excellency the Ambassador of the Federal Republic of Germany, Thomas Matussek.

This plaque was caused to be erected by the British-German Association,
President: the Lord Watson of Richmond CBE
Chairman: Christoph Urban
Vice Chairmen: John A. Hobley and John S. Faulder

Let's cover the easy bit first: The German at the end translates as “The old falls, the times are changing and new life blooms from the ruins.”  A quote from William Tell - a drama written by Friedrich Schiller in 1804.

For the Latin we had to ask David Hopkins for his help, and he writes:

The Museum of London holds an original plaque from the Steelyard carved with the Arms of the Hanseatic League and their motto.  There you can see that the motto actually says “THEUTONI” without an S.  It is written in Latin, but in an abbreviated form, in the same style that you see on some old coins.  The full form would be something along the lines of:

The main part of this translates as “the German Hanseatic traders who are settled in London in the Kingdom of England”.  However, I’m puzzled by the first word, which appears in clear lettering as SI.  This begins with a capital (enlarged) letter, so it must be the start of the inscription.  I can’t think of, or find, any obvious word this could be an abbreviation for, so this appears to represent the full word “si”.  But in Latin this can only mean “if”, which doesn’t make a lot of sense here.  The only thing I can think of is that it could be the first line of a treaty or a constitutional document that established the period of peace between the Hanseatic League and the people of London.  Perhaps it said “If the Hanseatic people agree to do X, then the people of London will do Y”.  But this is pure speculation on my part.  If you have any better ideas, let me know!

Thanks David, a full answer and a puzzle as well.

A London Inheritance has a post on Cannon Street Station which covers this whole area including the Steelyard.

This section lists the subjects commemorated on the memorial on this page:
Hanseatic merchants and 60 years of peace

60 years of peace between Britain and Germany

This section lists the subjects who helped to create/erect the memorial on this page:
Hanseatic merchants and 60 years of peace

The Association came into being in the House of Commons.  Those involved in s...

{Above a stylized picture of two performers:}Palace TheatreBuilt for Richard ...

We imagine the serrated edge is meant to resemble a silver coin but it makes ...

In the photo you can see two plaques: the one sticking out of the wall is in ...