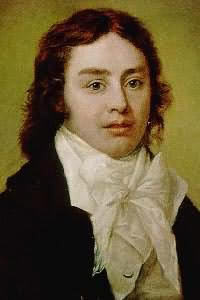 Poet and critic. Born and brought up in Ottery St Mary, Devon. Pupil at Christ's Hospital, 1781-91, where he became friends with Charles Lamb.

Died London. Buried in the chapel of Highgate School. In 1961 his and other coffins were moved to the crypt of the nearby St Michaels and a stone was unveiled by John Masefield. The space holding the coffins was bricked up.

2018: The Guardian reports that his body has been "found" in a wine cellar. It's an odd story since Coleridge's coffin was found below the slab in the nave that reads "Beneath this stone lises the body of Samuel Taylor Coleridge". So not that lost! The reference to the wine cellar is explained by the fact that St Michaels church was built on the site of Ashhurst House.

This section lists the memorials where the subject on this page is commemorated:
Samuel Taylor Coleridge

This section lists the memorials created by the subject on this page:
Samuel Taylor Coleridge