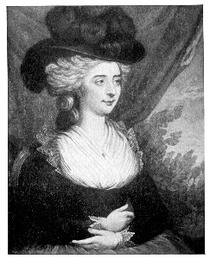 Born King's Lynn, Norfolk, father was Dr Charles Burney. Diarist, novelist: Evelina (1778), Cecelia (1782), Camilla (1796) and playwright. Her first novel, Evelina, was a big success and she entered literary society becoming good friends with Samuel Johnson. She became a member of the royal court, as an attendant to Queen Charlotte, 1786 - 1791, during which she witnessed one of King George III's first major periods of mental illness. When she left she was given a life-long pension and remained friends with the royal family. In 1793 married Alexandre D'Arblay, an exile from France. They returned to Paris and while there Fanny suffered a mastectomy without anaesthetic, which she then wrote about in horrific detail in a letter to her sister. In France 1802 - 1812 but returned to England with her son to avoid him being conscripted. She met Louis XVIII while they were both in London. When Napoleon escaped from Elba in 1815 she was in Paris and only just escaped as he entered. She was in Brussels in 1815 during the Battle of Waterloo. She then returned to England and lived in Bath and London for the rest of her life, dying at 29 Lower Grosvenor Street, Mayfair. Certainly not a dull life.

This section lists the memorials where the subject on this page is commemorated:
Frances (Fanny) Burney