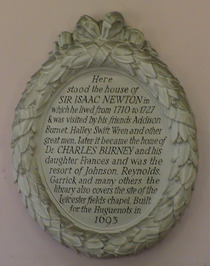 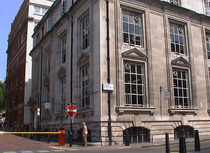 Here stood the house of Sir Isaac Newton in which he lived from 1710 to 1727 and was visited by his friends Addison, Burnet, Halley, Swift, Wren and other great men. Later it became the home of Dr Charles Burney and his daughter Frances and was the resort of Johnson, Reynolds, Garrick and many others. The library also covers the site of the Leicester Fields chapel, built for the Huguenots in 1693.

This section lists the subjects commemorated on the memorial on this page:
Sir Isaac Newton's house- detailed

This section lists the other memorials at the same location as the memorial on this page:
Sir Isaac Newton's house- detailed