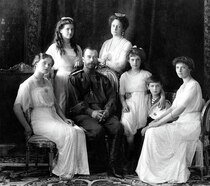 The Russian Imperial Romanov family were murdered in Ekaterinburg on the 4th July 1918.

The family were Emperor Nicholas II, his wife Empress Alexandra and their five children: Olga, Tatiana, Maria, Anastasia, and Alexei.

Nicholas and Alexandra were both first cousins of King George V, who failed to help them when necessary.

This section lists the memorials where the subject on this page is commemorated:
Tsar Nicholas II and family

Mary’s first 20 years were an amazing roller-coaster of a life. She spent th...