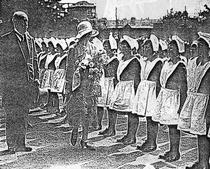 Prince, born in Pskov, now in Russia. Also known as Vladimir I of Kiev and Vl...