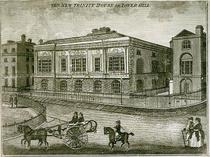 Incorporated by charter granted by Henry VIII in 1514. The first Trinity House was at Deptford and then at Ratcliff and Stepney in the 16th and 17th centuries. In 1660 Trinity House moved to Water Lane, off Eastcheap, the building being destroyed in the Great Fire of London in 1666 and subsequently rebuilt. It was again destroyed by fire in 1715 and the Corporation then moved to the present site in 1795.  This building, shown in this picture, survived until 1940 bombing, an unusually good innings for Trinity House, and even then most of its front facade seems to have survived.  As part of its 1953 restoration a new extension by A. E. Richardson and Houfe was built to the east. Past Masters of Trinity House include Samuel Pepys, the Duke of Wellington and the father of William Penn.  Thomas Coram was a Brother.  The website, Trinity House gives some history and Ian Visits has visited.

Businessman and philanthropist. Leonard Gordon Wolfson was the son of the fir...

Supporter of Charles II. After the Restoration was appointed Lord High Treas...

Founded St Bartholomew Hospital and Priory in 1123, including the church of S...