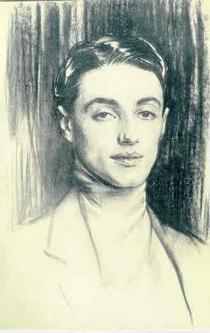 Sir Philip Sassoon attained prominence in the art world, high society and politics in the first decades of the 20th century. He was ADC to Douglas Haig during the First World War and later Parliamentary Private Secretary to Lloyd George. At Trent Park and Port Lympne he entertained guests such as George Bernard Shaw and T. E. Lawrence while his home in Park Lane became a famous political salon. He was Chairman of the Trustees of the National Gallery from 1933 - 1935, and as Minister for Works in the 1930s he was responsible for embellishing many of London's monuments and parks. As a collector Philip Sassoon was drawn mainly to the English and French 18th century, but he also collected contemporary artists such as Sargent and Orpen. {From an Agnews press release for An Exhibition of paintings and drawings from the collection of Philip and Sybil Sassoon.}

This section lists the memorials created by the subject on this page:
Sir Philip Sassoon

Statesman. Harley Street was named after him. Responsible for the creation o...

Grandson of the 3rd Duke of Portland.  Member of Parliament for Kings Lynn. P...