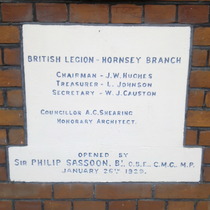 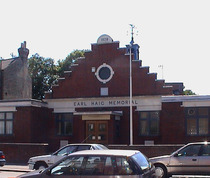 This double plaque is under the window on the left. Sir Philip Sassoon was ADC to Douglas Haig in WW1.

In 2008 we visited this area and collected the memorials but just forgot to take a photo of this one. In 2012 Ron Causton contacted us out the blue offering us his photo. He has been researching his family but can discover nothing about this Causton and neither could we. Thank you for the photo, Ron. If anyone has any info about this Causton please contact us and we'll pass it on.

The Building is clearly inscribed with "Earl Haig Memorial" and "1928". The weather vane had a gun carriage in place of the traditional cockerel.  We learn at OpinioN8 that in November 2012 a planning application was lodged to demolish this building.

This section lists the subjects commemorated on the memorial on this page:
Hornsey British Legion

This section lists the subjects who helped to create/erect the memorial on this page:
Hornsey British Legion

Secretary of the British Legion Hornsey in 1929.

Architect of the British Legion Hornsey in 1929.

Chair of the British Legion Hornsey in 1929.

Treasurer of the British Legion Hornsey in 1929.

This section lists the other memorials at the same location as the memorial on this page:
Hornsey British Legion

Unveiled in the the fiftieth anniversary year of his victory.