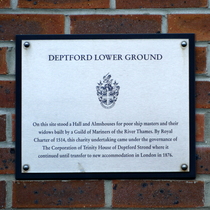 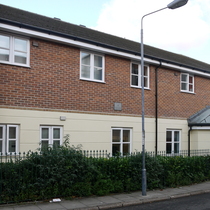 Deptford Lower Ground
{Beneath the Trinity House crest:}
On this site stood a hall and almshouses for poor ship masters and their widows built by a Guild of Mariners of the River Thames. By Royal Charter of 1514, this charity undertaking came under the governance of The Corporation of Trinity House of Deptford Strond where it continued until transfer to new accommodation in London in 1876.

A map at LDA Report shows two sets of almshouses; neither where this plaque is. This archeology report has plans and an engraving dated 1700 (which we have used as our picture of the almshouses) showing the "Trinity Almshouses" to have been immediately to the east of St Nicholas Church. The site has a complex history: the archeologists report that almshouses existed here in 1514 and that they were totally rebuilt in the late 1780s.

This section lists the subjects commemorated on the memorial on this page:
Deptford Trinity Almshouses