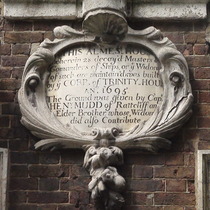 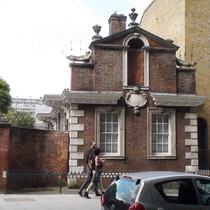 This almes-house wherein 28 decay'd master & commanders of ships or ye widows of such are maintain'd was built by ye Corp. of Trinity-House ano. 1695.
The ground was given by Capt. Heny. Mudd of Rattcliff an Elder Brother whose widow did also contribute.

These alsmshouses are often called Trinity Almshouses which confuses them with the Deptford Trinity Alsmhouses.  We have photographed the right end of the U-shaped almshouses. The left end is near identical, together with a similar cartouched plaque (somewhat damaged) with identical wording. And is also joyfully adorned with these utterly surprising ships. Surprising but perfectly appropriate. Ornamental Passions' post features these ships, fibreglass copies from the 1950s - the originals, carved marble, are in the Museum of London.

Spitalfield's Life has an extensive post on this hospital and reports that C. R. Ashbee saved it from demolition in 1895 and another post with a photo of the building c.1920 without the ships. 2018: the buildings are not being properly cared for and The Spitalfields Trust is offering to look after them.

A London Inheritance, in their survey of the interesting buildings in this area, say that these almshouses "suffered bomb damage during the last war, but were repaired by the GLC, with the chapel being fitted with 18th century paneling from a house in Hammersmith."

This section lists the subjects commemorated on the memorial on this page:
Trinity Green Almshouses

Mudd was born in Limehouse, but lived in Ratcliffe.  He was an Elder Brother ...

Unveiled as part of the 50th anniversary of Jamaican independence.