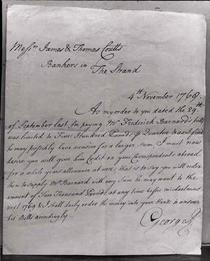 Banker. Born Edinburgh. With his brother, James, came to London and worked in a bank founded in 1692 by John Campbell. James married Campbell's grand-daughter and through her inherited the bank. Thomas and James ran the, renamed, bank and on James's death in 1778 Thomas took sole charge. For his love-life see Baroness Burdett-Coutts, who was his granddaughter by Sophia, one of his three daughters.

He preferred his less grand house, Holly Lodge, West Hill, Highgate, to his town mansion at 1 Stratton Street, on the corner of Piccadilly. Some sources say he died at Holly Lodge but we are informed by our contact at the bank that it was Stratton Street.

This section lists the memorials where the subject on this page is commemorated:
Thomas Coutts

The Story of Holly Lodge' by Margaret Downing, March 2009, says that this sta...

Trustee of The Memorial Gates Trust. Gulam Kaderbhoy Noon was born on 24 Jan...