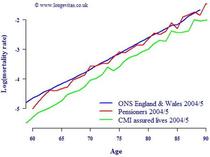 Equitable Life, the world's oldest mutual insurer, started business in 1762 in the parsonage of St Nicholas Acons in Nicholas Lane. It pioneered scientific life assurance by basing premiums on age and mortality rates.

Elsewhere Dr Richard Price (1723 - 1791) is credited with having founded actuarial science.  He was also the radical minister at the Dissenters' church on Newington Green (inside which there is a plaque) where he met and influenced Mary Wollstonecraft, Benjamin Franklin, Thomas Paine, Joseph Priestley, etc.  Roberta Wedge, author of the blog A Vindication of the Rights of Mary, offered to see if there was a connection between Price and the parsonage “where scientific life assurance began in 1762”.   Roberta found in The Actuarial Profession reference to a report Price produced in 1774, “one of the key documents in the history of actuarial science”.  This report was addressed to the Society’s directors.  She also discovered a readable history, as a slideshow with lecturer's notes, which says Price was a consultant to the Society from 1770 onwards. The Society's first actuary was appointed on the recommendation of Price; William Morgan, who put his stamp on the organisation while serving from 1775 to 1830, was Price's nephew.

This section lists the memorials where the subject on this page is commemorated:
scientific life assurance

Site of the Parsonage of St Nicholas Acons where scientific life assurance be...

Records are sparse but it seems Mason owned a shop in St James's Market and i...

A privately funded charity established by Charles Pink. Its objective is to f...