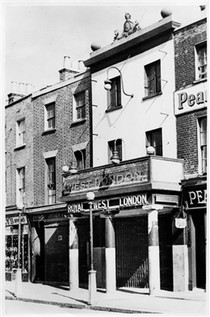 Opened as the Royal Pavilion West and subjected to many name changes over the years, including: Royal West London Theatre, Marylebone Theatre, West London Theatre. Converted to a cinema in 1932. Bombed in 1941 and then used as a warehouse until a fire destroyed the building in 1963. The Picture source website has full details.

This 1902 map shows this narrow frontage on the west side of Church Street. The theatre itself was behind the shops, with the auditorium to the north and the stage to the south, running between Salisbury Street and Carlisle (now Penfold) Street.  The auditorium was almost exactly where the Church Street Library now is.

This section lists the memorials where the subject on this page is commemorated:
Theatre Royal Marylebone