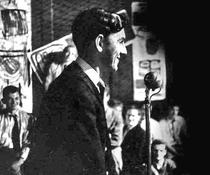 Peter Cook said this was modelled on "those wonderful Berlin cabarets which did so much to stop the rise of Hitler and prevent the outbreak of the Second World War". Lenny Bruce, Barry Humphries, Dudley Moore's jazz trio, all appeared here. The picture shows Cook himself on stage at The Establishment. As a private club it was outside the stringent censorship laws. The club was very successful and another was opened in New York in 1963, but neither was long-lived.

This section lists the memorials where the subject on this page is commemorated:
The Establishment Club

Co-founder of Pret a Manger with Julian Metcalfe, who he met at the Polytechn...

Founded by T. Walton. See his page for some details.  Our picture was generou...