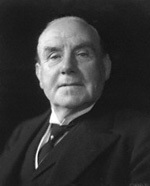 Charles Cheers Wakefield was born and raised in Liverpool. (Cheers was his mother's maiden name). Became an oil-broker, founding his own firm in 1899, C.C. Wakefield & Co. later Wakefield Oil Company, later Castrol. In 1919 on the first trans-Atlantic flight Alcock and Brown used a Castrol product. He became wealthy and a philanthropist especially in the fields of aviation and motor sport, presenting the Wakefield Gold Trophy for the world land speed record.

After he opened Castrol’s head office in the City of London his philanthropy benefited the people of London. He was elected to the Court of Common Council, serving as a sheriff, alderman of the ward of Bread Street and Lord Mayor from 1915 to 1916. Raised to the peerage in 1930. In 1937 he and Tubby Clayton founded the Wakefield Trust to help All Hallows by the Tower, Toc H, and good causes in the East End.

We see that the NRA have a good post about Wakefield, the connection presumably being that he was on the governing council of the Society of Miniature Rifle Club (small rifles or small club?). In 1933 Wakefield gifted a shooting challenge trophy to the club. The design of the trophy was based on The Monument, but we don't know why. In 1947 the club resolved the ambiguity of its name by changing it to National Smallbore Rifle Association.

The Wakefield Trust has a very good post which finishes: At his funeral, snow was falling, and Tubby Clayton described the scene as “each flake a ‘Thank You’ from a London child”.

This section lists the memorials created by the subject on this page:
Charles Cheers, Baron Wakefield of Hythe CGE, LLD

Co-executor, with Edwin Bedford, to Mary Gray Ratray who died in 1873. Lived ...

From their website: "Merrill Lynch is one of the world’s premier providers of...