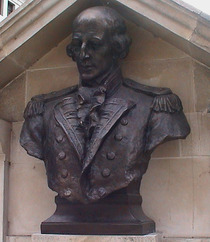 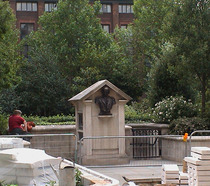 {On the west side, beneath the relief depicting a scene with 5 people on a shore:}
The discovery and fixing the site of Sydney on Wednesday, 23rd January, 1788.
Reading from left to right:
Surg. J. White, R.N.,
Capt. Arthur Phillip, R.N., founder,
Lieut. George Johnston, Marines A.D.C.,
Capt. John Hunter, R.N.,
and Capt. David Collins, Marines.

{On the east side, beneath the relief depicting a ship and rowing boat:}
The founding of Australia at Sydney on Saturday, 26th January, 1788.
Figures in rowing boat leaving H.M.S. Supply are:
Capt. Arthur Phillip, R.N.,
Lieut. P. Gidley King, R.N.,
and Lieut. George Johnston, Marines A.D.C.

{On the stone below the bust:}
In honour of Admiral Arthur Phillip R.N., Citizen of London, founder and first governor of Australia. Born in the ward of Bread Street 11th October 1738. Entered the Royal Navy 1753 and died 31st August 1814.

To his indomitable courage, prophetic vision, forbearance, faith, inspiration and wisdom was due the success of the first settlement in Australia at Sydney on Saturday 26th January 1788.

This memorial, originally erected at St Mildred's Church Bread Street, and unveiled by his late Royal Highness Prince George, KG, GCVO, RN on 7th December 1932, was presented by the late Charles Cheers, Baron Wakefield of Hythe CGE, LLD, Alderman of the ward of Bread Street, Lord Mayor of London 1915/16 to the citizens of London and the people of Australia as an enduring link between the motherland and the great island continent of Australia.

The church was destroyed by enemy action in 1941 but the bronze bust and plates were salvaged from its ruins.

This re-erected memorial was unveiled on May 8th 1968 by His Excellency the Honourable Sir Alexander Downer, KBE, High Commissioner for Australia and re-dedicated by the Right Reverend Francis Evered Junt, Bishop of Stepney.

This section lists the subjects commemorated on the memorial on this page:
Admiral Arthur Phillip

This section lists the subjects who helped to create/erect the memorial on this page:
Admiral Arthur Phillip

Wikipedia remarks that Benito Juárez is notable for the number of statues and...

We think this visage probably represents an ancient sage, probably Greek or R...

{Inscribed on the red granite plinth:}Lincoln by Andrew O'ConnorPresented to ...