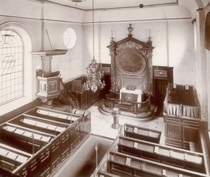 There were enough Swedes in London (mainly sailors) for a congregation to form in 1710 and the first church was set up in Wapping in 1728 (pictured), opened by and named for (the future queen) Ulrika Eleonora.  Emanuel Swedenborg lived nearby and attended this church.

The church in Harcourt Street was built in 1911 and the congregation moved taking everything they could. No alternative function for the empty church could be found and since it was rapidly deteriorating it was demolished, in 1921.

Our picture source St George in the East is a rich source of information about the Swedish churches in London.

This section lists the memorials where the subject on this page is commemorated:
Swedish Church

A non-profit, ecumenical, and interfaith scholarly organisation which preserv...