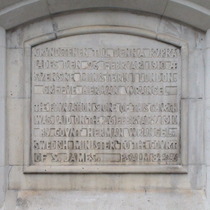 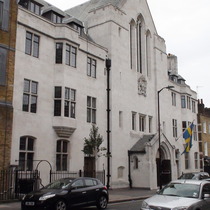 The foundation stone of this church was laid on the 26 February 1910 by Count Herman Wrangel. Swedish Minister to the Court of St James.
Psalm 84-2-6

The referenced psalm includes some words that make it appropriate for travellers, but of the female gender, which seems odd for sailors:

Even the sparrow has found a home,
and the swallow a nest for herself,
where she may have her young -
a place near your altar....

This section lists the subjects commemorated on the memorial on this page:
Swedish Church - W1

There were enough Swedes in London (mainly sailors) for a congregation to for...

This section lists the subjects who helped to create/erect the memorial on this page:
Swedish Church - W1

Plaque unveiled by David Suchet and Loyd Grossman (then chairman of the blue ...

{On the 60's extension occupying the corner site:} This foundation stone of t...