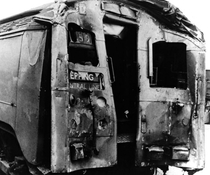 The accident, caused by driver error after a signal failure, occurred on the Central line of the London Underground. A signal in the tunnel between Stratford and Leyton had been damaged, and this and the preceding signal were both showing red. Trains were moving slowly past the failed signals, under the 'Stop and Proceed' rule, in which they were required to move with extreme caution.

However, one train collided with the back of another which was waiting at the first signal, and the front two coaches were partially telescoped. 12 people died and 46 were injured. The website from which our photograph is taken also includes a Pathé News item on the rescue operation.

This section lists the memorials where the subject on this page is commemorated:
Stratford Underground crash

{Above the London Transport logo:} In remembrance of the twelve people killed...

At the time of his death Norton was a landscape architect involved in the cre...

From Thamesweb: "In January 1953, the east coast of England was devastated by...