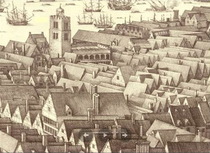 On the site of the church was built St Olaf House.

The Ancient Order of Druids sprung out of a surge of interest in the 18th cen...

From University of Manchester we learn that Bray was "a poor uneducated layma...