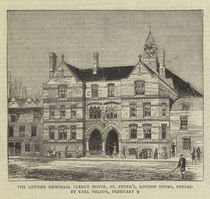 1856 Reverend Charles Fuge Lowder commenced work on the mission in Wapping (named for their church St George's-in-the-East). Initially it was met with hostility, but in time it came to play an important part in helping the impoverished people of the district. 1857 an order of nuns, the Community of the Holy Cross, was founded here to assist Lowder work with the poor in this area.

They built St Peter's church, opened in 1866. Designed by Frederick Hyde Pownall, building work started on St Peter's Day (29 June) 1865. The body of the church is behind these street-front buildings.The St Peter's Mission House was built in 1883. We think this is the same building described on Lowder's plaque as the Clergy House. A bomb damaged it in 1940 and it was rebuilt 1950. The history of the development of this site is complex, extending 1866 - 1950. Wikipedia helps.

This section lists the memorials where the subject on this page is commemorated:
St George's Mission and St Peter's church, Wapping

Noted as the earliest public athletic ground in London. It includes ten tenni...

Moved to Forty Hill in 1959. President of the Enfield Preservation Society, 1...