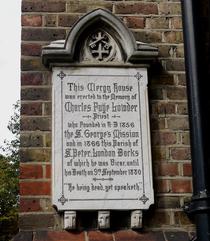 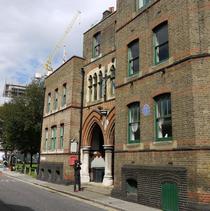 This Clergy House was erected to the memory of Charles Fuge Lowder, priest, who founded in A.D. 1856, the S. George's Mission and in in 1866, this parish of S. Peter, London Docks, of which he was vicar until his death on 9th September 1880, "He being dead yet speaketh". (quote from Hewbrews 11:4.}

This section lists the subjects commemorated on the memorial on this page:
Charles Fuge Lowder

This section lists the other memorials at the same location as the memorial on this page:
Charles Fuge Lowder

{Between the depictions of two ships:} St. Nicholas Church Deptford, the anci...