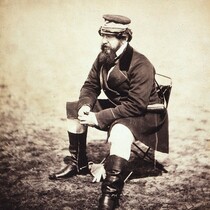 War correspondent. Born near Dublin. 1841 began in journalism, came to London, studied for the bar and became attached to The Times. As a war reporter he covered: the Crimean War, the Indian Rebellion, the American Civil War, the Austro-Prussian War, and the Franco-Prussian War. HIs reports from the Crimea were widely read and influential. Knighted in 1895. Died at his home, 202 Cromwell Road.

This section lists the memorials created by the subject on this page:
Sir William Howard Russell

News of the World

First daily newspaper to be published in England. Published by Elixabeth Mall...