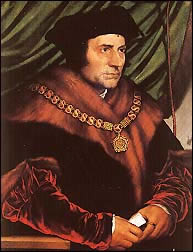 Born Milk Street. In conflict with Henry VIII over religion he was imprisoned in the tower, found guilty of treason and beheaded on Tower Hill. Final words: "The King's good servant, but God's First."

As a traitor, his head was displayed on a pike at London Bridge for a month. His daughter, Margaret, later rescued the severed head and it is believed to rest in the Roper Vault of St Dunstan's Church, Canterbury.  Alternatively it may be buried within the tomb erected for More in Chelsea Old Church. A third, unlikely, story is that John Donne's mother, Elizabeth, who was a great-niece of Thomas More, carried his head around with her.

A very good friend of Erasmus who often stayed with More in Chelsea.

This section lists the memorials where the subject on this page is commemorated:
Sir Thomas More

The year given for the parachute mine looks a little like 1944 but it must be...