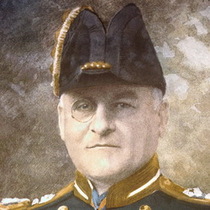 First Chief of the Secret Intelligence Service, or MI6.

He was appointed head of a spying section in 1909 with Germany being the main target, and then Russia. After the war he became the head of all foreign espionage and remained so until his death. He initialled papers 'C' and that has lead to all subsequent chiefs being known as 'C'.

In 1914 he lost a leg in a car crash, in which his son who had been driving was killed. Died at home, 1 Melbury Road.