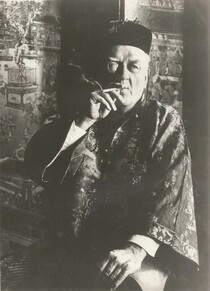 Richard Joseph Hughes CBE was an Australian journalist who spent much of his life in the Far East as correspondent for The Times and other publications. Generally considered to be a British spy and possibly a double agent.

In a 2017 piece written by Damian Flanagan the Sydney Morning Herald reports that from childhood Hughes had a passion for the Sherlock Holmes stories. In Japan in 1948 "Hughes had the idea of combining his obsessive interest – Sherlock Holmes – with intelligence gathering activities and formed the "Baritsu Chapter", supposedly a Sherlock Holmes appreciation society. The name was an allusion to "Baritsu", the fictional Japanese martial art practised by Holmes. The "Baritsu Chapter" was highly exclusive and started with just 12 distinguished members. As it expanded its network and held lavish dinners, the Japanese prime minister himself and his son became keen devotees."

The Baritsu Chapter was also known as the Tokyo Sherlock Holmes Society.

Our Picture source writes "He was flamboyant, gregarious, bohemian, even at times quite eccentric. He wore a monocle, dispensed ecclesiastical benedictions, and insisted that Sherlock Holmes was still alive, living on a bee farm in Essex. He held court, sometimes uproariously, for decades at the Hong Kong Foreign Correspondents’ Club, where a sculptured bust in a bar pays tribute to him."

This section lists the memorials created by the subject on this page:
Richard Hughes (journalist)

The presence of Sherlock Holmes at this unveiling is rather misleading since ...