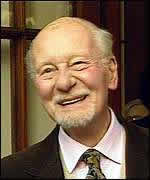 Actor. Born 7 Gledhow Gardens, South Kensington as Arthur John Gielgud, great nephew to Ellen Terry. The name indicates his Lithuanian descent. A great Shakespearean actor, he is possibly best known nowadays as Dudley Moore's butler in the 1981 film 'Arthur'. A homosexual before it was legalised, he suffered humiliation when arrested for 'cottaging' in Chelsea in 1953. Died at his home at Wotton Underwood, near Aylesbury. The Gielgud Theatre was named for him.

This section lists the memorials where the subject on this page is commemorated:
Sir John Gielgud

This section lists the memorials created by the subject on this page:
Sir John Gielgud

Unveiled by Sir John Gielgud on the centenary of the first night of An Ideal ...