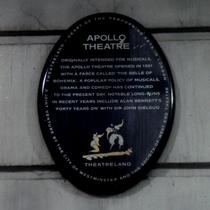 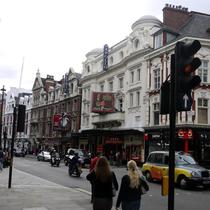 Apollo Theatre
Originally intended for musicals the Apollo Theatre opened in 1901 with a farce called 'The Belle of Bohemia'. A popular policy of musicals, drama and comedy has continued to the present day. Notable long-runs in recent years include Alan Bennett's 'Forty Years On' with Sir John Gielgud.

{A stylized picture of two performers and:}
Theatreland

{Around the edge of the plaque:}
Theatreland - heart of the performing arts in London, a joint venture by the City of Westminster and the Society of West End Theatre.

This section lists the subjects commemorated on the memorial on this page:
Apollo Theatre

A Grade II listed building, designed by architect Lewin Sharp. It was the ven...

This section lists the subjects who helped to create/erect the memorial on this page:
Apollo Theatre