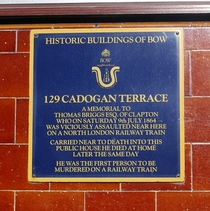 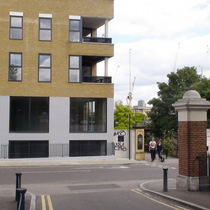 Plaque: First murder on a train

129 Cadogan Terrace. A memorial to Thomas Briggs Esq. of Clapton who on Saturday 9th July 1864 was viciously assaulted near here on a North London Railway train.
Carried near to death into this public house he died at home later the same day.
He was the first person to be murdered on a railway train.
Historic Buildings of Bow

The plaque was first erected on the 2-storey pub that used to be here, the Mitford Castle, formerly the Top O' the Morning, closed in 2013 and demolished in 2015. The building can be seen on this Twitter page, with the plaque below the lower window, second on the left.

At one stage a new pub was promised but August 2016 the site was under wraps with a hoarding promising "A boutique collection of eight luxury 1-3 bedroom apartments". And, 2017, we were pleased to see that the plaque has been re-erected, albeit framed by graffiti.

Since the tiles of the old pub are so attractive we decided to keep that photo of the plaque itself.

Looking at a current map you may begin to question the veracity of this plaque, since there are no railway lines nearby. Stanford's map c.1870 shows that a line used to run immediately behind these buildings.

This section lists the subjects commemorated on the memorial on this page:
First murder on a train

This section lists the subjects who helped to create/erect the memorial on this page:
First murder on a train

Sarah Bernhardt laid the foundation stone of this building 1904.

The clock above was erected by public subscription in memory of Minnie Lansbu...