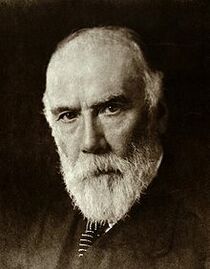 Physician and cardiologist. Our picture source gives a biography of this man.

The 1871 census shows him as a druggist assistant still living at Pickston Hill Farm with his parents, the four siblings mentioned in the 1861 census and two younger sisters: Margaret MacKenzie (b.1862) and Jane Campbell MacKenzie (1862-1942) together with two male servants. He qualified as a doctor and in the 1881 census he is shown as general practitioner boarding at 68 Bank Parade, 2 Bankhouse Street, Burnley, Lancashire, the home of Dr Henry Briggs, M.D.

On 13 September 1887 he married Frances Bellamy Jackson (1865-1947) at St Stephen's Church, Shottermill, Haselmere, Surrey. The marriage register shows him as doctor of medicine residing in Burnley whilst her residence was recorded as Haselmere. They were to have two children: Dorothy MacKenzie (1888-1965) and Jean MacKenzie (1892-1909).

The 1911 census gives his occupation as a doctor of medicine (physician) residing at 17 Bentinck Street, Marylebone, with his wife, their surviving daughter, a cook and a housemaid.

This section lists the memorials where the subject on this page is commemorated:
Sir James MacKenzie