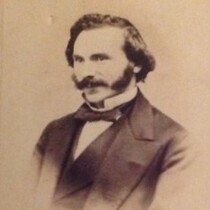 Lived in and ran his medical practice from a house at 289, Cambridge Heath Road.

We found this Facebook page where Phil refers to his great-grandfather in 1866 commencing "... a 5 year apprenticeship with a surgeon by the name of William Henry Brotherton at 289 Cambridge Heath Road ..."

We were delighted to find Brotherton quoted in the proceedings at the Old Bailey in February 1872 in the case of Amelia Portbury (29) for the wilful murder of Julia Aria, the accused's mother, in Park House, Approach Road E9. The victim was 70 years old and, according to the 12-year old son of the accused, who gave evidence, a regular rum-drinker. Brotherton had attended the victim prior to the incident and also carried out a post mortem examination. His report on the state of the victim's liver contradicted the story that she was "a person who has indulged in drink". Nonetheless the verdict was not guilty.

Shortly after publishing this memorial we discovered more information:

The address given, 496 Bethnal Green Road, is annoying since, on current maps, it doesn’t exist – the railway slices through the space between 492 and 502. This 1868 map shows the railway drawn in - it opened in 1872. So, it seems that in 1870 Brotherton was living in a condemned house and shortly after moved around the corner to a property that backed onto a railway line, all rather odd for someone of his status (all those qualifications). Also, another source (the Facebook page referenced above) places him in the Cambridge Heath Road address in 1866, which is contradictory, or he had two addresses, close together.

Mike Coleman found a date of death as the 2nd quarter of 1882 but also some references which suggested Brotherton’s date of birth was not the 1840 on the plaque. We asked our colleague, Andrew Behan, to try and resolve this issue. He writes: “Despite what it shows on the plaque, I make the year of his birth as 1831, 18 February 1831 to be precise.

I started with the probate records that showed his widow to be a Mary Ann Brotherton. Checking marriage records I found a William Henry Brotherton, who gave his occupation as a chemist and residing in Islington, marrying a Mary Ann Emms on 8 October 1856 at St John's Church, Islington. His father was shown as a John Brotherton. When they applied on 29 September 1856 for a licence for this marriage they both formally declared that they were 'aged twenty-one years and upwards'. If this William Henry Brotherton was 21 years or more in 1856 he could not have been born in 1840.

Using the ages showed on the 1871 and 1881 censuses and the death index of 1882 (found by Mike Coleman), you get a date of birth as about 1830/31 and lo and behold I found a Christening Record that showed a William Henry Brotherton being christened on 28 October 1832 at Old Church, St Pancras, London. His parents were shown as a John & Ann Brotherton and he was recorded as being born on 18 February 1831. Not conclusive of course, but what are the chances of two William Henry Brotherton's being born at this time and residing in London with a father called John, (the same as that is recorded on his marriage certificate)? I think this is a far better date than just the 1840 shown on the plaque.“

And lastly, Andrew points out that The Hunt House shows that Cambridge Road become Cambridge Heath Road sometime between 1929 and 1945.

Mike, Andrew and all of us are now Brothertoned out and the file is closed (unless you can conclusively answer some of the outstanding queries, or have something really interesting, like a photograph?)

And.... December 2020, Dr Brotherton's great grandson, Patrick M. Brotherton Hinchy, contacted us with exactly that. Photographs of the living room at 289 Cambridge (Heath) Road and of the good doctor himself, confirmation of our researches, some historical information about the family and some personal, detailed information about the sort of man he was. The rest of this page is from Patrick (all but the last paragraph).

You were puzzled about the wrong birth date on his plaque. Your excellent research was correct. His date of birth was 18 February 1831, son of John and Ann Brotherton.

The origin of the plaque and its wrong birth date is as follows. My late mother (his granddaughter) had inherited and owned 289 Cambridge Heath Road during the Second World War. In her Sept 14th 1961 reply to the Borough Surveyor of Bethnal Green, whose original letter unfortunately no longer exists, she says:

"During the war, the house was partially bombed, rebuilt, and then completely bombed. I wanted to keep the site as a "garden of rest" in memory of my grandfather, so that people could sit there. But on visiting the site, I saw it would be foolish. There was a park opposite and the site was too small and shut in.

I decided to sell it to Mr Rosenbaum who badly need the ground, on condition that my grandfather's name should be remembered on the spot where he had lived and died, so faithfully in the service of the people of Bethnal Green whom he loved so much - "the grandest people in all the world" as he called them."

So in 1957 my mother had sold the derelict bomb site to Mr Rosenbaum (I think later changed to 'Ross') to extend his textile(?) factory next to it. The extended factory buildings are clearly seen in the London Remembers photo. Mr Rosenbaum then installed a memorial plaque on the factory wall without further reference to my mother and unfortunately with the wrong birth year 1840 for Dr William H Brotherton instead of 1831.

You were puzzled by the address 496 Bethnal Green Road. It puzzles me too, since my mother never mentioned it, as far as I remember. As you confirmed, Dr Brotherton lived and married in Islington in 1856, after which he may have initially lived and/or worked at 496 Bethnal Green Road before moving to 289 Cambridge Road.  In the Wellcome Library’s copy of the 1867 Report of the Medical Officer of Health for Bethnal Green, Parish of St. Matthew, Dr Brotherton is mentioned as the District 7 Medical Officer who attended 1084 Pauper Illness cases.

Quoting from my mother’s 14 September 1961 reply to the Borough Surveyor of Bethnal Green. "Dr Brotherton was often heard to say that "there are no better people anywhere in the world than the people of Bethnal Green and I love them dearly." He married as a young chemist, became a doctor and surgeon and with the help of a devoted wife, spent the rest of his life dedicated to the service of the people of "dear old BG", even to the extent of being parted from his young family who were sent to relatives for safety in the country (!), either Highgate or Holloway, whenever smallpox raged, as it fairly frequently did in his time. By thrift and hard work, he saved enough to buy what the estate agents called "a gentleman's residence" in Cambridge Road, where he died.

He charged fees by a simple 'rule of thumb'. If patients lived in big houses (and there were good residential areas as well as slums in those days), he counted the front windows and charged accordingly. He charged poor people little, or nothing if need be. Nevertheless the people had a rugged independence that disliked charity and always liked to pay something. He respected their feelings and refused nothing. In this way he accumulated a strange collection of pet mice, dog, cat, silk worms and even a monkey. These were kept in fine weather on the flat roof on top of the Cambridge Road house. (There is a photo of his daughter Kate holding a big old battle-scarred Bethnal Green tomcat which became a much loved family pet named “Little Titch” after the popular music hall star.)

He was dearly loved by the people of Bethnal Green who called him "Brotherton of the Road". One night called out for a child birth, he passed a dark alley and a man stepped out to rob him. But his accomplice shouted, "Not him. He’s the good doctor."

He worked without ceasing and in the end sadly worked himself to death. One day, exhausted, he returned home to his wife and said, "I am afraid, Mary, there is not one patient I have seen today who is as ill as I am”. He died soon afterwards at the age of only 51."

Dr Brotherton had three children, Horace, Ada and Kate. Ada married a Jardine Matheson ships officer Tom Smithers and went to live in Shanghai China, where her unmarried sister Kate joined her later and where my mother was born, returning to England (Brighton) after Tom Smithers death in China around 1909.

Andrew Behan has some more information to add, and then we will close the file, again: Brotherton died 10 April 1882. There were two sets of probate records for him. The first confirms that administration of his personal estate was granted to his widow on 5 July 1882 and that his effects totalled £3,486-4s-10d. Then when his widow, Mary Ann Brotherton of 12 Yerbury Road, Holloway, died on 11 March 1893 administration of her estate was granted on 1 June 1893 to her daughter, Kate Brotherton and her effects totalled £906-4s-1d. At the same time this daughter was re-granted administration of her father's (William Henry Brotherton) estate and his effects now totalled just £2,714-2s-4d. Either way, he still made a good living in Bethnal Green - there must have been a lot of windows in some of the houses that he used a rule of thumb to calculate his fees!

This section lists the memorials where the subject on this page is commemorated:
Dr William H. Brotherton

Opened with 12 beds in 1845. The local German community was very large at thi...