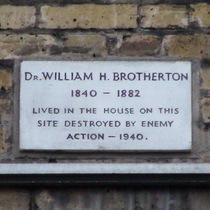 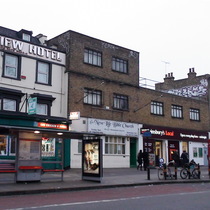 Maps from the late 19th century show this as a continuous terrace of housing, Cambridge Terrace, from Birkbeck Street up to Bethnal Green Road.

Unusually no one else seems to have spotted this plaque, or if they have they're not letting the internet know about it.

The plaque looks to be contemporaneous with the building, so we'd date it to about 1950, which is 70 years after Brotherton's death. That's a long time to remember someone. Who could have erected it? If his family continued to own the property then they would have been involved in the reconstruction, so perhaps they saw him as the family's founding father. This plaque reminds us of other, more recent, doctors similarly honoured (Dr Farman and Dr Silverman), but those plaques were erected shortly after their deaths.

2020: We were delighted when Patrick Hinchy, the great grandson of this much-loved doctor, contacted us to explain the origins of the plaque. The house in which the doctor had practiced was inherited by his granddaughter, Patrick’s mother. It was damaged badly in WW2 and in 1957 she sold the derelict site to Mr Rosenbaum who had a factory in the building next door, to the north, and needed to expand. She sold it with the condition that the doctor’s name be remembered “on the spot where he had lived and died, so faithfully in the service of the people of Bethnal Green whom he loved so much”.

Rosenbaum expanded his factory across what are now (2020) a Sainsbury’s Local and the New Life Bible Church. Good to his word he installed the plaque on the front wall but unfortunately with the wrong birth year, 1840 instead of 1831.

See the doctor's page for more information about this remarkable man.

This section lists the subjects commemorated on the memorial on this page:
Dr William Brotherton

Lived in and ran his medical practice from a house at 289, Cambridge Heath Ro...

Erected in loving memory of Robert Hollond by Ellen Julia his widow, 1881.B. ...