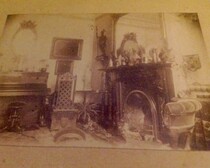 The house was probably built 1800 - 1850 and was occupied from at least 1866 until his death in 1882, by Dr Brotherton. He lived there and also ran his medical practice from that address. It was destroyed by bombs in WW2 and in 1957 replaced with a factory extension from the neighbouring house to the north.

This photo shows the Brotherton living room at 289 Cambridge (Heath) Road. It features the 'Brotherton Chair' to the right of the piano. The wooden panel between the chair's two front legs displayed the Brotherton coat of arms.

Dr Brotherton's descendant, Patrick Hinchy who kindly let us have the photo, still has the piano and small coat of arms picture, but the Brotherton Chair has unfortunately been lost. Patrick writes this about the origins of the Brotherton family:

Dr William H. Brotherton was a descendant of Thomas de Brotherton (1300-1338) son of the Plantagenet King Edward I by his second wife Margaret of France. To reinforce Edward I's ruthless assertion of primacy over Scotland after crushing the charismatic Scottish leader William Wallace ('Braveheart') at the Battle of Falkirk (1298), the heavily pregnant Queen Margaret travelled to Scotland in order to establish a Scottish identity for Edward I's new offspring. But on the way she went into labour (after a day following the hunt!) in Brotherton near Pontefract in Yorkshire and her newborn was baptised 'Thomas de Brotherton.'

This section lists the memorials where the subject on this page is commemorated:
289 Cambridge Heath Road

From AIM: "Medical students at St Bartholomew's Hospital are first recorded i...

Born Mobile, Alabama. Worked in the medical department of the US army and sp...