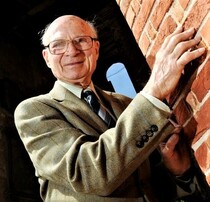 Long term resident of Stanmore. From HADAS "Dr Frederick Hicks is a retired GP and Vice-Chairman of the Stanmore & Harrow Historical Society."

From MyLondon: "... Dr Hicks has attended St John the Evangelist Church, in Rectory Lane, Stanmore, for 50 years and has held a number of roles, including church warden from 1987-1991, and chairing the Greater Stanmore Old Church Working Group since 1989, which has been instrumental in securing funds to maintain the historic site. Dr Hicks, of Marsh Lane, Stanmore ...".

When some of the monuments at the Old Church were put on the "at risk" register Hicks led the campaign to save the church, becoming Chairman Old Church Appeal. We believe the photo shows him physically working on the monuments himself.

Our colleague, Andrew Behan, informs us that Dr Frederick Nathanael Hicks was born on 22 August 1920 in Longreach, Queensland, Australia, the second of the four children of the Reverend Charles Maurice Evelyn Hicks (1880-1957) and Elizabeth Hicks née Smith (1886-1966). He was educated at Rockhampton Grammar School, Queensland.

Travelling aboard the RMS Otranto from Brisbane, Australia, he, together with his parents and three siblings, arrived in the Port of London on 23 October 1930. He continued his education at Lancing House Preparatory School, Lowestoft, Suffolk, before winning a scholarship to attend Marlborough College Boarding School, Wiltshire. His parents were living at St Dionis Vicarage, 18 Parsons Green, Fulham until 1936 when they moved to The Vicarage, Bulstrode Road, Hounslow.

From 1939 to 1941 he went up to Jesus College, Cambridge, were he obtained a First Degree in Medicine, whilst residing at The Lodge, The Street, Alderton, Woodbridge, Suffolk. His post graduate training was undertaken from 1941 to 1944 at the Central Middlesex Hospital group, Park Royal. On 24 July 1944 he qualified, obtaining both his MRCS and LRCP and in 1948 Cambridge University awarded him his MB BChir.

On 25 January 1945 he married Marie Ida Newell (1921-2014) in the Aylesbury registration district. From October 1945 to November 1947 he served in the Royal Navy. Electoral registers, medical registers and telephone directories show that from 1949 to 1959 he was listed at 168 Kenton Lane, Kenton, Stanmore, Middlesex, and from 1962 at 31 Marsh Lane, Stanmore. Telephone directories in 1966 show his residence remained at 31 Marsh Lane, but his surgery was listed at 404 Honeypot Lane, Stanmore.

This section lists the memorials where the subject on this page is commemorated:
Dr Frederick N. Hicks

Secretary of TAG, she had been visiting 'The Bolan Tree' since the 24th Septe...

It aims to foster an interest in all matters of historical significance relat...