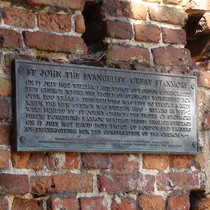 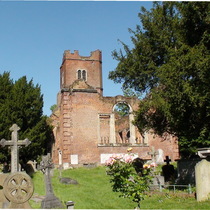 St John the Evangelist Great Stanmore
On 17 July 1632 William Laud Bishop of London consecrated this church where the people of Stanmore worshipped for over 200 years. This building was left to become a ruin when the new church was built in 1850. Repairs in 1991-2 were funded by St John’s Church; the people of Stanmore, public donations, Harrow Heritage Trust; English Heritage.
On 17 July 1992 David Hope Bishop of London led prayers of thanksgiving for the conservation of the church.
Prebendary Michael H. V. Bowles – Rector

MyLondon informs: "{The old church} gained Grade II listed status in 1951. In 1989, renovation began, with English Heritage providing financial support. In 1991, with sufficient funds promised, the builders and masons moved in. On the 360th anniversary a special service was held inside the ruin." We think that's when the plaque was erected.

The plaque is just inside the ruin, near a locked gate in the south-facing wall. Nearby a modern notice lists the dates on which the building can be visited.

St John's Church gives the history of this ruined church and the current one beside it. But there was an even earlier church. A 14th century church of St. Mary  used to stand about a mile to the south, near the Wolverton Road bridge. This was abandoned in 1632 and replaced with St John's, now the ruin on Uxbridge Road. When a larger one was needed in 1850 it was built beside the previous one, which was to be demolished. But local opposition was strong so the destruction was halted, leaving the ruin we have today.

In our researches, when a new church is needed it is normally built on the site of the old one. But they've done things differently in Stanmore, twice.

This section lists the subjects commemorated on the memorial on this page:
Old church - Stanmore

This section lists the subjects who helped to create/erect the memorial on this page:
Old church - Stanmore

A trust set up with the objectives of encouraging artists and architects of b...

Stonemasons working in Stanmore in 1992.

This building was erected in 1853. We had this entry in our puzzle corner ...

This is the birthplace of the Bentley Motor Car. Number one was produced her...