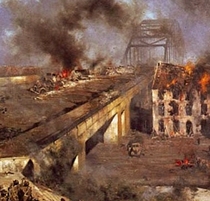 In WW2, during Operation Market Garden, the British 1st Airborne Division and the Poish 1st Independent Parachute Brigade were given the task of securing the bridge at Arnhem. They were parachuted and glider-landed into the area from the 17th September, but the bulk of the force was dropped rather far from the bridge and never met their objective. A small force managed to make their way as far as the bridge but was unable to secure both sides. The allied troops encountered stiff resistance from the German army, which had been stationed in and around the city. The British force at the bridge eventually ran out of ammunition and were captured on the 21st September, and a full withdrawal of the remaining forces was made on the 26th. The battle was dramatised in the 1977 film 'A Bridge Too Far'.

This section lists the memorials where the subject on this page is commemorated:
Battle of Arnhem

{Beneath the Polish coat of arms and beside the emblem of the Polish undergro...