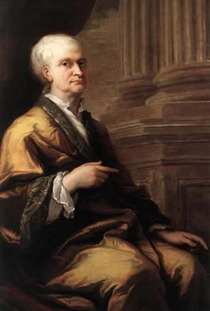 Born in Woolsthorpe, Lincolnshire, on Christmas day, according to the calendar in use at the time. Died in Kensington (where he had gone in search of country air). The exact dates of birth and death vary from source to source. Buried Westminster Abbey.

He entered Trinity College, Cambridge in 1660. He propounded the laws of motion, universal gravitation, optics and the basis of differential calculus. He was Master of the Mint from 1699 - 1727, President of the Royal Society from 1703 - 26 and was knighted in 1705. Used to feature on the £1 note.

It is sometimes said that he lived in Leicester Square, but he actually lived nearby at 35 St. Martin's Street.

It is also said that Newton was practically an agelast, as Maths pages tells us: Isaac Newton's assistant at Cambridge claimed that during five years he saw Newton laugh only once. Newton had loaned a copy of Euclid {geometry} to an acquaintance, and the gentleman asked what use it was to study Euclid, "upon which Sir Isaac was very merry".

It's said that Newton loved animals and invented the cat-flap. Despite this, Newton may not have been a very nice man - he enjoyed witnessing the executions of the counterfeiters he pursued as part of his job at the Mint, and he had a major falling out with Robert Hooke, not speaking to him for the rest of his life. He fought a vicious feud with Leibniz over who invented the calculus. Newton's allegation that Leibniz had stolen his ideas was aggressive and destructive. It is now accepted that Newton wrote down the calculus first and Leibniz was the first to publish, while most schoolboys wish it had never been invented at all.

This section lists the memorials where the subject on this page is commemorated:
Sir Isaac Newton