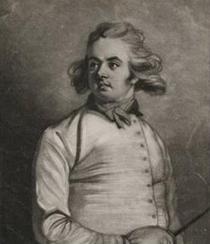 Fencing master. Born St James's Place, Piccadilly. Briefly took over his father's fencing academy in Carlisle House, but then moved it to the Royal Opera House. Note, there were two Carlisle Houses in Soho; this one was at the west end of Carlisle Street, now (2020) the Nadler Hotel. A fire in 1789 caused him to move again to Bond Street. Retired in 1817 following a fencing injury inflicted by Edmund Kean. Died in Twickenham.

Find out more about the Angelo family in Soho Bites podcast.

This section lists the memorials where the subject on this page is commemorated:
Henry Angelo

Bare-knuckle prizefighter. Born in Bristol. He fought under the London Prize ...

Multiple stage bicycle race, which has been held annually (apart from the wor...