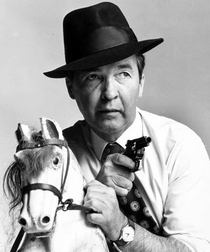 Steeplechase jockey and writer. Born Richard Stanley Francis in Coedcanlas, Wales. In his racing career, he won over 350 races and was champion jockey in the 1953-54 season. From 1953 to 1957 he was jockey to Queen Elizabeth, the Queen Mother. He was riding her horse Devon Loch to almost certain victory in the 1956 Grand National, when it inexplicably fell, close to the winning post. Retiring in 1957, he took up an equally successful career as a crime writer, producing over forty best-sellers. Died at his home on the Caribbean island of Grand Cayman.

This section lists the memorials where the subject on this page is commemorated:
Dick Francis