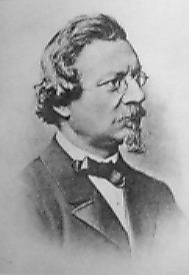 Our picture source and his Wikipedia page give a full biography of his life.

In 1854 Hofmann was awarded the Royal Medal of the Royal Society, for his researches into organic chemistry published in the Transactions of the Royal and Chemical Societies.

He died, aged 74 years, on 5 May 1892 in Berlin, Province of Brandenberg, Kingdom of Prussia in the German Empire, now called just Germany, and was buried in the Cemetery of the Dorotheenstadt and Friedrichswerder Parishes, Chausseestraße 126, 10115 Berlin, Germany.

This section lists the memorials where the subject on this page is commemorated:
A. W. Hofmann