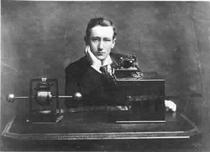 Born Bologna. Arrived in London, with his mother, in 1896 to patent his method of communication without wires. In 1897 he established the Wireless Telegraph & Signal Company, which survived under a number of names (e.g. GEC-Marconi Ltd) until sold to Ericsson in 2006. 1909 Nobel Prize in Physics. Developed the radio telegraph system.

The telegraph operators on the Titanic were employed by Marconi's company. Marconi was called before the inquiry into the disaster and questioned on whether he authorised the operators either to withhold information or to sell their stories to newspapers.

Was an active member of the Italian Fascist party. Died in Rome.

This section lists the memorials where the subject on this page is commemorated:
Guglielmo Marconi

From this site Guglielmo Marconi made the first public transmission of wirele...

The world's first business computer was built and operated by J. Lyons &amp; ...

A chemist. His work on the souring of milk and the use of heat to preserve i...