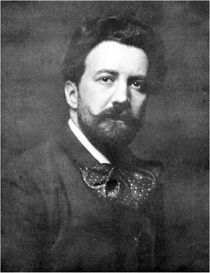 Conductor and composer. The first British-born career conductor. Born in London. He founded the promenade concerts in 1895 at the Queen's Hall. When this was destroyed in the Blitz the concerts moved to the Royal Albert Hall and Wood conducted them until his death, at Hitchin Hospital.

This section lists the memorials where the subject on this page is commemorated:
Sir Henry Wood

Musician and songwriter. Born Liverpool.  One of the four Beatles. Shot dead ...