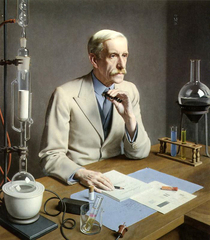 Biochemist. Born Frederick Gowland Hopkins at 16 Marine Parade, Eastbourne. He studied at Guy's Hospital, where he received the University of London gold medal. In 1897 he became the first lecturer in chemical biology at Cambridge. He discovered what he called 'accessory food factors' which later became known as vitamins. Knighted in 1925 and joint winner of the 1929 Nobel Prize for physiology or medicine. Died at his home, Saxmeadham, 71 Grange Road, Cambridge.

This section lists the memorials where the subject on this page is commemorated:
Sir Frederick Hopkins

This section lists the memorials created by the subject on this page:
Sir Frederick Hopkins

Physicist and mathematician, best known for his invention of the barometer.

Mathematician and astronomer.   Argued that the Sun, not the Earth, was the c...