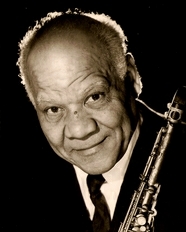 Saxophonist, clarinetist and composer. Born in New Orleans. He was an outstanding clarinetist in his teens and toured Europe with Will Marion Cook's Syncopated Orchestra. In London he was imprisoned for assault and then deported back to the United States. In 1925, he and other members of the 'Revue Nègre' sailed to Cherbourg and toured extensively throughout Europe. In France he was imprisoned and deported again. It wasn't until the 1940s that he settled down and achieved wide acclaim as a musician. Died in Paris, on his birthday.

Philip Larkin appreciated Bechet: "There are not many perfect things in jazz, but Sidney Bechet playing the blues could be one of them."

This section lists the memorials where the subject on this page is commemorated:
Sidney Bechet

Nightclub formerly known as The Fridge.

Originated in the opera recitals presented by Lilian Baylis at the Old Vic th...

A socialist song, written by Jim Connell. (supposedly on a train journey betw...

Founder of the Strauss dynasty of Viennese light music composers. He compose...